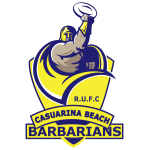 Casuarina Beach Rugby Club started life as a junior rugby club back in 2002. Over the course of it’s life it has managed to field a mostly full contingent of junior teams, playing across both the Far North Coast Rugby and Gold Coast Rugby Unions. In that time it has also produced some exceptional players who have gone on to not only district representative honours, but also state level, NRC and Super Rugby.

In 2017 we entered senior rugby for the first time. Our inaugural First XV played in the Far North Coast Rugby Union, and despite it being our first season ever, managed four good wins from 16 starts. That put us in 7th place from 8 teams at the end of the regular season. It was by all accounts a very successful first year, and a solid platform was laid for the future of senior men’s rugby at the club.

2017 also saw our first ever women’s 7s side enter competition. Although the girls struggled for numbers at times, they played every week of competition and were consistently amongst the best on the field. Two of our girls also went on to representative honours playing in the QLD State Championships.